The world's largest supercomputer is searching the sky for alien signals and home computer users are donating their machines' idle time. The internet has made it all possible. By Sean McManus 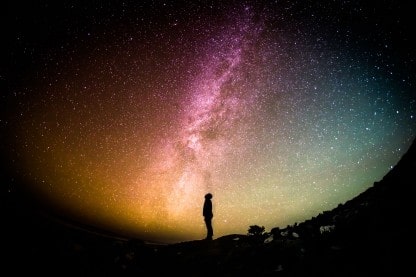 About 500,000 computer users are donating their idle computer time to the search for aliens in what claims to be the largest distributed processing project ever. (note: by 2001, there were 3,000,000 participants). The Seti@home (search for extra terrestrial intelligence) software runs as a screensaver on Windows and Macintosh clients and as a low priority task on Unix machines. Using the internet, Seti@home is able to reach computers that would otherwise have wasted idle time animating toasters or slideshowing supermodels.

"The progress has been fantastic," says Seti@home project scientist Dan Werthimer. "500,000 people are participating and contributing about 1000 years of computing time every day. This is by far the world's largest supercomputer."

The project analyses data from the world's biggest radio telescope at Arecibo in Puerto Rico, piggybacking the long-running Serendip IV Seti programme. Each night the telescope scans the sky for signals, dumping 35GB of data onto tape. Because Arecibo does not have a high bandwidth internet connection, this tape is sent by post to the University of California in Berkeley, where the data is divided into 0.25MB blocks and sent out over the internet. Every five days for about five minutes, the client computer automatically exchanges data with the server when the user connects to the internet. All machines receive the same size work unit, regardless of their specification, and machines are sent new work once their batch is processed. The program consumes 20MB of disk space.

Each work unit has been planned to represent about 24 hours of screensaver time on a 233MHz computer, but computers have been taking an average of 39 hr 26 min to complete a work unit.Windows 95 machines have averaged a time as slow as 64 hr 34 min. Pentium/Windows machines represent the greatest portion of the client base. Although many are running the client software without graphics on other platforms, Werthimer admits that the screensaver's appearance could be a key factor in the project's success. "Many probably like the graphics and wouldn't run it unless it looked cool," he concedes.

Participants come from 203 countries including many developing countries. The top five countries by number of participants are the US, the UK, Canada, Germany and Japan. The US has more participants than the other four combined. "Their motivations are various," says Werthimer. "Most are happy to help out. Many want to know are we alone? Is anybody out there? Some are computer-savvy and think this is a cool project to run on their computer. Lots of children are interested in Seti."

The server specification is Solaris on Sun Sparc. "Sun Microsystems donated the computers and we have extensive experience with these machines," says Werthimer. "The Unix-like operating system is very powerful. Most scientists are using this platform." The project has received further funding from the Planetary Society, Fujifilm Computer Products, Informix and Star Trek producers Paramount Pictures. There has been no government support.

The software was written in C by a team of ten volunteers based at the University of California. Development was slow in the first two years but rapidly picked up once funding was available to hire assistants in the final six months. The source code is being kept confidential with no plan to release it to the public. "We hope to launch Seti@home II," says Werthimer, "and for security reasons, and to make sure everybody does exactly the same computation, we can't give out the source code." Consistency is important for the scientific admissibility of the data and the project is wary of becoming a hoax target.

The computing resources available have enabled Seti@home to search for signals about ten times weaker than Serendip IV, although the project is still only processing 2.5MHz out of Serendip's 100MHz bandwidth. Seti@home works on the assumption that any deliberate alien signals would be sent in a narrow frequency range because it is easier for us to filter from background noise. To eliminate signals from earth, the program looks for a signal that rises and falls in the 12 seconds it takes for the sky to cross the Arecibo dish. Work units contain 100 seconds of data and overlap to ensure that no signal patterns are broken at the edge of work units.

Anyone finding the crucial blip on their screen will be named as a co-discoverer after extensive efforts to confirm the extraterrestrial origin of the signal. Nearly all signals can be dismissed as radio frequency interference or test signals that Seti@home issues to check that the system is working. Any remaining signals would be verified by the Seti@home team using the Arecibo telescope when it is next scanning the same sky area. If confirmed, the signals are followed-up with dedicated telescope time. Another Seti group would then be invited to confirm the results independently, using a telescope a long way from Arecibo to confirm the signal is interstellar. If it is still unexplained, Seti@home would announce the signal to the astronomical community, naming the screensaver user as a co-discoverer. The internet would be used to openly publish information on the discovery.

The project is set to run for two years, after which the sky above Arecibo will have been scanned three times. Werthimer puts the chance of finding an intelligent signal at "1% per decade", but knows what message he would send in reply given a free choice. "Please send all your music, literature, science and information about the other civilisations you've been talking to," he says. "And also, please, send information on how to hook up to the galactic internet."

The project was extended significantly beyond its original planned lifetime, but stopped distributing new tasks in March 2020. The team says: "We'll continue working on the back-end data analysis. Maybe we'll even find ET!"

Get the screensaver here:

Tutorials and guides for the Raspberry Pi, a budget computer perfect for learning to program.