Sean McManus reports on a new technology that enables you to mix a single and then download your preferred mix as an MP3.

The record industry has been duping fans with limited edition CDs for years, often producing many more in a numbered edition than the fanbase can buy up. But now the real thing is here: songs from your favourite band, mixed especially for you and made available in a limited edition of one.

'Don't Say You Love Me', taken from Erasure's album 'Nightbird' charted at number 14 in the UK. I'm the happy owner of a unique mix of the track, created using the digital interface at www.erasuredownload.com (site no longer active, sadly).

The interface shows branches representing different parts of the music, with the leaves on them representing different variations in those parts. I clicked on the leaves to decide which bassline, synth lines, drum pattern, vocal delivery and backing vocals I prefer. As I played with the seven parameters, I could listen to the impact my tinkering had on the looping chorus. When I was happy, I could check out and download an MP3 of my mix for £2.

The MP3 comes with unique cover artwork as a PDF. 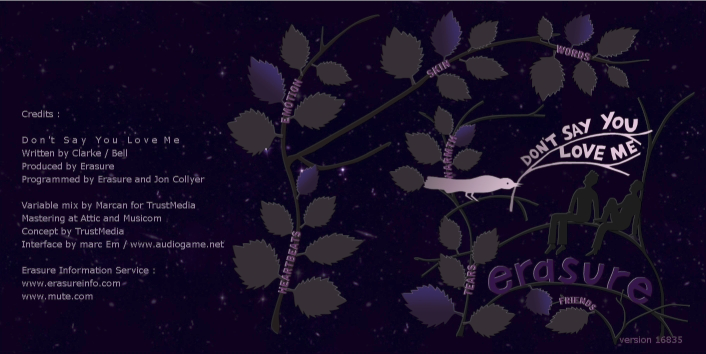 Now that I've bought version 16835, you'll have to create a different version. The site won't sell two copies of the same mix, but there are 40,000 different possible combinations to choose from. "When someone tries to buy a version we check whether the version number is already bought or not," says Marc-Henri Wouters, CEO and founder of Trust Media, the company behind the customisation technology. "If the desired version has not been previously bought, then we continue the buying process. Otherwise we ask the user to choose another version." Now that is what I call a limited edition.

Wouters explains the mixing process: "When you check out, our server gets the exact specification of your version (it's a number actually). We open a digital audio workstation (DAW) session using Steinberg Nuendo with our plugin. This plugin is able to define the mix according the number of the version. The version is downmixed and then compressed in MP3."

The variants of the song that are possible can be radically different. While Wouters' preferred MP3 sounds robotic and spacey, my own was poppy and heartfelt with pure vocals.

The concept preserves artistic integrity by keeping the variant versions within the confines that the artists define. It's not the same as remixing, where the user has the instruments and voices locally and has complete freedom to vary the balance between them. "In our concept all the possibilities are approved by the artists and are stored in the DAW session," says Wouters. "Therefore you have a limited number of unique pieces and people can't lose the initial intent of the artist because the artist can approve all the possibilities. Moreover the mix is professional because it is done with a professional tool and mastering is also applied after the mix."

But it's not just about enabling artists and listeners to collaborate on mixes. It's also about anti-piracy.

The final song, mixed to your specification, is provided as an MP3. It's a format that's traditionally been more popular with listeners than record labels. While listeners like the format's openness and flexibility, record labels have been scared at the ease with which MP3s can be copied and shared. The Erasure site urges users to be responsible in their use of MP3s, but if an MP3 should be shared, its legal owner can be easily traced. Not through any embedded tracking code, but through what the content sounds like.

"I discovered Napster, a few years ago now," says Wouters with a winking smiley. "The music industry has based its revenue on the fact that it can make value on each copy of an original recording. While they had the monopoly on duplication and distribution, everything was fine for the music industry. Since the CD-R and internet, the industry has completely lost this monopoly and therefore its copy-based model. For me, the solution was in the content itself (not in the container like digital rights management or DRM). I think that when the music and movie industry understand that their old model based on the copy is dated, personalised content will take off."

The identity of the user is stored together with the version number at checkout time. The patent application for this technology, filed in 2003, says:

Wouters says: "Concerning piracy, we do have the possibility to trace the legal owner of a version but up to now we haven't done so. What is more interesting with this concept is the fact that you don't make the value on the copy but on the personalisation. Actually, we have seen that the sharing of a version just pushes people to buy their own version. So in that context sharing is more promotion than piracy. In my view, people should be free to share."

The interface is based on artwork from Erasure's 'Nightbird' album (pictured, right).

"The interface was influenced by the original CD's artwork," says Marc Em of Audiogame, who was commissioned by Trust Media to create the interface. "I just changed the leaves and branch positions, and also the background. I like very much the atmosphere: the music and design are very well tuned. Maybe too much because as a user, I enjoy playing with the interface and I'm not sure that I would buy any personal version."

He adds: "The biggest challenge was to make the leaves beat on the music when you rollover. There is no function for that in Flash MX, and there is no application able to do that in a internet browser. So Marc-Henri developed a C++ application that read the sound files and converted them into arrays of peak values. Then Flash read the arrays and synchronised the music and leaves."

The economics of customisation

To set up a single track for customisation in this way, it costs between €2000 and €10,000 (which is a maximum of about £6840 or US$11,850). That means the Erasure site needs to sell about 3420 copies of 'Don't Say You Love Me' to break even on the costs of the customisation technology, although there are likely to be significant additional costs too. "Currently labels don't see it as a profit yielding but more like a promotional tool," says Wouters.

Previous acts Trust Media has worked with include The Prodigy, Airlock and Soldout. Wouters says: "We are open to all kinds of bands."

Looking to the future

Marc Em says: "I hope these interactive interfaces will give ideas to application developers and I hope they will create new tools to control sounds in a web page. Flash does it hardly. There are only three functions for the sound: play, stop and volume. It's impossible to loop an external MP3 properly or to synchronise sound and music precisely. I hope the future will be more 'multimedia' and creative."

A future project for Trust Media could be an all-star mix for Amnesty International. Wouters says: "I'd like to make a collaborative project with my favourite artists. Each one would create his variations (instrument, rhythm, voices, ...) on the same structure. Then people would be able to create their own version."

While most mass customisation projects over the last few years have focused on personalising products or tailoring them for fit, few have involved adapting creative works to the consumer's taste. In future, this technology could broaden a band's audience. I didn't like the vocals on Wouters' preferred mix of the Erasure single, but that need not deter me from buying the song because I can create my own mix with different vocals. If you like a band's songs but find they're just too noisy, this technology might be what you've been waiting for, assuming the band wants to play along.

Wouters concludes: "The best thing about this technology is the shift in the relationship between the artist and the audience."

Sean McManus's novel 'Earworm' is a satire of the music industry, based around a major record label and all those who invest their hopes and dreams in it. The book is independently published and can be bought online now.

"Raising a number of surprisingly sophisticated issues, this book is enjoyably cynical about the seemingly cold-hearted and impenetrable nature of the record industry and peppered with a number of highly comical cameos from the cream of rock'n'roll, which ensures that it never feels like heavy going."
- Record Collector Magazine. More great reviews!