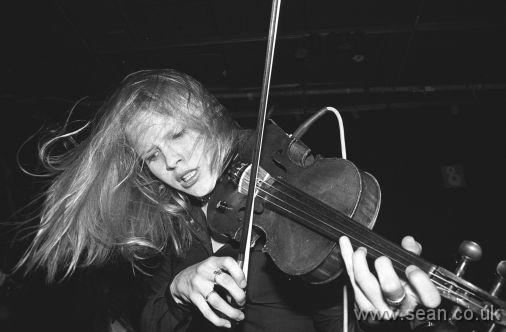 Lucy throws herself into April 1st. More photos of My Life Story

In 1996 it seemed My Life Story were going to conquer the world. Having spent six years on tour and suffered a badly timed record label collapse, the band had finally landed a major record deal. In this interview, which was published in a shortened form in Making Music, the band's singer/songwriter reveals the band's roots, their dreams and their recording secrets...

There are classical violinists busting bow strings as they mosh their way through pop music. Horns are blowing, confetti is flying and frontman Jake Shillingford is sparkling in the spotlight, kicking the air and breathing life into a six year old concept band: My Life Story.

Why have you done this stupid thing?" booms Jake after the show, mimicking the usual reaction to his band. You idiot! You've got eleven people playing on stage. You must be driving yourself mad.

But Jake has a blueprint. When made redundant from a DJ job at Dingwalls in the late '80s, he took his redundancy money to America to discover himself. "I went out there with a Kerouac book and a few bits of clothes," he says. "One day, I was in a hamburger restaurant in New Orleans with a couple of friends. We were talking about what was missing from music at the time and we wrote a list. Things like: thought-provoking lyrics; big, bombastic sounds; a bit of show-offness; personality and pretentiousness. I love pretentiousness, it's what pop music is all about. We wrote these down in a list and came up with My Life Story."

Sing Big! Sing as big as you can!

The idea is to sound dramatic. "Everything we try to achieve and do must be bigger than you imagined it and bigger than anyone else has done it," says Jake. "We put it up on the studio wall. 'Jake, sing big! Sing as big as you can! Play as big as you can!' Much the same as in a screenplay, I try to exagerrate the lyrics and and give it a big carchase at the end. As opposed to just getting out of a cab. People respond to that."

Although at first it seemed a string quartet would be visually striking enough, the sound didn't measure up to the beefy Bond movie soundtracks in Jake's record collection. Orchestral samples are used to support the live sound and overdubs are used in the studio. "I want the best dedicated samples of orchestras there are," emphasises Jake, shunning the use of samples to create artificial sounds. The strings were recorded by setting up a pair of stereo microphones and moving the string quartet progressively a row away. Layering the recordings made it sound like an orchestra pit full of strings. "Mornington Crescent is a good first album," says Jake, "but like most first albums, you never realise the true potential of the group. Next time I want to get a full 66 piece orchestra in."

Working with the existing eleven musicians would be unmanageable, were it not for their classical training. "They're used to the composer being the composer and they interpret the music in their own way. That's the enjoyment they get out of it," says Jake. "And the strings love the glamour of being in My Life Story. They've played the Albert Hall. I haven't. I'm jealous. They say you get your fifty pounds, then you're off home. You don't get to sign the autographs or play in front of the bright lights." 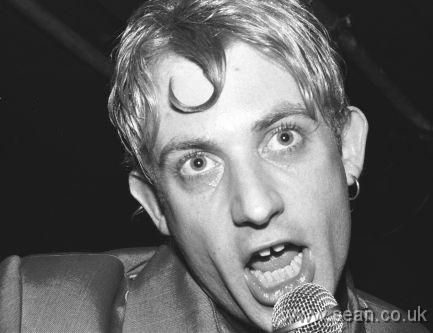 Jake writes the songs alone. "My job is to write the songs and I know I am good at that. I might not be so good at singing, but I know I am a good songwriter. I won't let a song go any further if it doesn't sound good acoustically," he says. "Sometimes our music can be so covered with everything that people forget there's a song underneath." The music is arranged by Jake, non-band member Aaron Cahill or cellist Oliver Kraus. "I don't come from a classical background, so my arrangements tend to be very much on the pop side. Aaron is no longer in the band, although I started the idea with him, and he does most of the good arrangements. I think he's a genius, an absolutely brilliant arranger."

Other players are keen to arrange too. "There are a couple of others in the band that I am keen to work with, but you cannot work with eleven people, you can only work with one partner. It's good because it gives everyone a chance to contribute. I don't want to turn into a Prince type character, where the songs all start to sound very similar," says Jake. "Even though I do write the songs, it's good to have different people arranging them."

Over the last five years, musicians have come and gone. Drummer Jason Cooper left to join The Cure and the string section has changed totally since it guested on 1991's Wonderstuff album. Jake says: "The band has been very supportive, considering a band of this size can never earn any money. They really do believe in the music. Because it is such a large band, people do come and go, but the nucleus is still there. I let them come and go as well. If someone's got a classical gig and they're getting paid money for it, that's great because we just bring in a debt. It's like a football team. We have a squad of players and a team of eleven."

Now the band has signed to Parlophone records and Sony Music Publishing, cashflow should be less of a problem. Their first record deal was with tiny label Mother Tongue. Their records were difficult to obtain and the marketing muscle was not there. "A lot of my friends have been offered deals and they always seem to mull over them for years. A strong word of advice," says Jake sincerely. "I believe that if somebody offers you a deal, you take it. Even if nobody else is taking it and it's the worst deal in the world, you take it because you can always change it. That's exactly what we did. We could have hung on, but then we might never have got a deal."

The new album is scheduled for release in the new year. Jake says: "We've written the album and arranged most of it.With the first album each song had an element of humour and grandiosity. We were saying that these twelve tracks sound like My Life Story. With the second album, each song will have its own identity. We're having one really humourous song that's absolutely hysterical, using a Dixieland trad jazz band in the middle. That's called 'For the Eloquence and Influence of Mr Gammon'. I wrote it for my tailor because I couldn't afford to pay him. As you write more and more songs, you tend to overcomplicate them. So we will also include a couple of very stripped down songs."

In the end, Mr Gammon did not make it onto the album 'The Golden Mile', which was released in 1997. As promised, the tracks contrasted strongly, with the band having a quirky rock-out on tracks like 'I Dive', but taking morose reflection to new places on 'November 5th'. The five singles from the album were packed with new songs, many of them more satisfying to listen to than most of the album tracks: 'I love you like Gala' carried an intensely emotional spoken vocal over a lengthy and stirring string quartet arrangement; 'The Garden Fence Affair' built up with such searing energy and apolcalyptic orchestration that it was the highlight of many live performances; '17 Reasons Why' took the band's traditional finale to the lesser charted waters of flute and harpsicord solos. But these singles failed to bother the charts as much as Parlophone had hoped, despite support slots with Wet Wet Wet and a continued strong live presence.

In 1998, the band were dropped. As a parting gesture, the band's long lost debut 'Mornington Crescent' was issued with extra tracks by Parlophone in January 1998. Early 2000, My Life Story released their third album 'Joined up Talking', now stripped down to a five piece. Using more music technology, the band experimented with web marketing, as revealed in my second My Life Story interview. The album held together better than The Golden Mile, but singles again failed to chart.

My Life Story played their final gig at Camden Underworld Friday 15 December 2000, the last in three goodbye concerts that mirrored the 'Month of Sundays' the band played before getting signed to Parlophone. The band began by playing an unplugged set of 'November 5th', 'Claret' and 'You can't uneat the apple'. The main set included most of the third album and crowd-pleasers from the past such as 'Suited and Booted', 'Sparkle', 'Motorcade', 'Penthouse in the Basement' and '12 Reasons Why I Love Her'. "We're not really splitting up," joked Jake on stage, "we just like to see girls cry."

As it had been at the Month of Sundays gigs, the final song in the main set was 'Funny Ha Ha', Jake's riposte to cynical critics. My Life Story's dying notes were from the final encore of the moving ballad 'Angel'. A bootleg double CD of this concert is known to be in circulation.

In July 2001, Jake and MLS arranger Aaron Cahill launched their new project: ExileInside, including MP3 downloads from the website. The debut album was released in August 2002. Jake also released a second album without Aaron.

During 2006, My Life Story reformed for two gigs to promote two new compilations. 'Sex & Violins' was a best-of, with two new tracks from the vaults, one of which was former live favourite 'The Dice Man'. Megaphone Theology was a 2CD collection of b-sides and rarities, with two tracks on CD for the first time, one previously unreleased song and four demo versions of tracks from the last studio album.

My Life Story returned with a powerful and moving new album called World Citizen in 2019, supported with a UK tour.

Related pages on this site